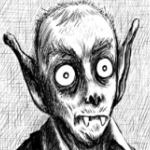 Toxteth O'Grady is a fictional person mentioned in the episode of the British sitcom The Young Ones called Bambi, as the answer to several questions in a scene spoofing the high-brow television quiz show University Challenge. Hailing from the United States, O'Grady was referred to as holding the world record for the most marshmallows stuffed up one nostril (604), and the record for the world's stickiest bogey; both of these dubious "facts" being sourced from the fictitious Daily Mirror Book of Facts - Did You Know?